I think the significance of the pope this year isn’t so much who he is or what he does, as it still is something that matters to the word. Why it’s so fascinating is what makes it significant. During Benedict XVI’s papacy, It felt as if the Vatican was playing catch-up while sticking to the guns of the old world.

Let’s be honest here though… This is the perspective of someone that’s on the outside looking in. Everyday we struggle to accept the ever changing ways of all people in a society just on our own. For some reason Benedict will say something that will erupt a storm of distaste, especially since the topics always seemed to be sex and homosexuality (in no particular order).

Suppose you can’t really blame a place that just seems to stay inside it’s bubble.

You’d think that surely, nobody cares about popes and christianity, or overall religion anymore. I’m mostly subject to that attitude, because that’s how we seem to live life on this part of the globe.

Then Benedict resigned and the Vatican went through the process of finding a new pope. Every news outlet kept tabs on it because, heck it was news! Business as usual to me. Then they announced that a new pope was chosen and they were going to be live on location for ‘the hot scoops’.

That morning, I was in the coffee shop that I always go to, ordering what I always get. The tv was on CBC news as they were getting ready to introduce the new pope. I sat at the counter and watch as if a feeling came over me that it was worth doing so.

Such a moment doesn’t really matter to the world that I live in. There are no gatherings in front of giant tvs around Vancouver to wait for the pope to come out (that I’m aware of). But on that screen in front of me was a gigantic crowd filled with people of all shapes, sizes, ages and colours.

To see it still matter to the old world, suddenly made it feel relevant to me. 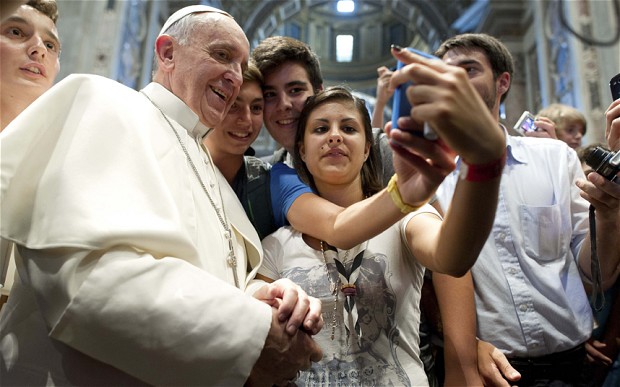 Such pope. So picture. Much ‘with it’.

When Jorge Mario Bergoglio came out, as the now known as Pope Francis, he was already far more different than any other pope that preceded him. Being born born in Buenos Aires, Argentina meant that he was the first pope from the ‘new world’. Even though the man is 77 in age he has a different energy about him that’s very open and loving, and in no short of time earned himself the reputation as the people’s pope.

When it came to the constant subjects that mattered to women and homosexuality, his answers were as clear as the teachings he was dealt, but he also made it clear that his message will be open to everyone. He cared not if people were convicted of crime, ill or scarred, for him we are all equal and deserve the right to feel that way.

To put it bluntly, Pope Francis is definitely someone that the Vatican needs. Since he has a philosophy that puts people ahead of the church, he’s become a much more important figurehead. When he shows compassion for anyone, while he represents an ideal, it becomes accessible to all.

Being pope probably doesn’t seem as important as it used to be, since younger generations don’t care about traditions. We often toss them out the window with the belief that ‘things need to change’ because ‘that’s how it is’! I bet we still wonder why there is British Royals running about, because it’s become nothing more than a title (though for some reason it’s made marriage far too exciting)… Yet that day of March 13th has shown me, that the old ways still matter to a lot more people than I thought.
—

Also through much deliberation, TIME magazine declared him 2013’s Person of the Year. They did a much more fascinating write-up.  He’s quite the interesting fellow, so please give it a read!

One thought on “Significant things of 2013: We have a pope”