It happens a lot these days doesn’t it? That feeling that something is smoldering deep within your jowls. A bitter taste builds up. You hate it so much that you just have to get it out of your mouth.

That’s right, an opinion is starting to form. Everyone else has felt it many times before, so they reassure you, “It’s just your opinion, man.”

Then again you’re not sure if they’re serious or only quoting ‘The Big Labowski’.

Sometimes I wonder where hate comes from within certain groups. You could say that people are just straight up misogynistic, but I have to disagree. We’ve been going through the motions enough times where I feel like that can’t be it, because that bitterness comes from a much more childish place.

Is it the rise of the radical new feminism? No, that can’t be it either. Over the years I’ve noticed that people tend to keep associating the most trivial matters with certain words just because it’s easy.

So how about we just figure this out together, huh? have a seat on this couch, lie down if you want to. Tell me your problems, Soulja boy.

Maybe you constantly feel threatened by the opposite gender just out of sheer ignorance. The internet is a vast database of everyone’s words, but you only give yourself enough time to read the surface.

So when you skim through something, you make yourself assume. You know the old saying, right? ‘To assume is to make and ass out of u and me’. So then you get angry and start looking into the person, reading up on their information, digging through twitter feeds and forum posts.

But never to understand them better, only to find a way to attack.

Seems kind of backwards doesn’t it? Reading up on years worth of things that a person says only so you can abuse them? Threaten them?

I’m not a scientist, but have you ever considered that you might be emotionally unstable? You never give yourself the ability to think things through because your Mega Man game is being threatened by someone that isn’t as big of a fan as you are.

Oh wait, there’s a new development isn’t it? You said Mega Man, right? You want something so badly that you would threaten to hurt anyone that you think is getting in the way of it.

Hmm.. ok, how about if I told you that it’s not a Mega Man game? What if I told you that the girl got a chance to get the job because of the people she knows working there. Instead of it being handed to her, she had to go through an interview process like everyone else. You know that’s how the world works, right?

I think that’s enough time for this session… But before you go, I have to tell you one thing.

There are some things in life that are never going to be the thing you want them to be, no matter how hard you try. If you want to live a healthier lifestyle, you’re going to have to learn to let things go. 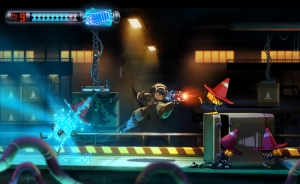 I think kickstarter is an amazing psychological study in a lot of ways. There are those that use the service as a way to help a project get started, as long as there’s a compelling enough case for the project in question.

Those people are fine, I know a lot of those people. Supporting the creativity of others is what helps keep the world in motion. I mean, that’s the whole point of kickstarted in the first place.

But then there’s the other side, the people who fund a project because they think they’re going to get what they are convinced it is. At least, that’s the debate you can spark when talking about Comcept’s Might No. 9. For a lot of these people, they’re under the impression that Keiji Inafune wants to make the Black Market knock-off of Mega Man games.

Well, he probably does. Early gameplay footage suggests so. Talks about making sure the game looks and feels nothing like Mega Man, also points evidence of him wanting to make it as Mega Man as possible while trying not to get sued over it. It’s easy to believe that the project only got money because we’re lead to think it’s the next game in that long running, long ignored franchise.

So the whole process is a lot like playing a game of Jenga in front of millions of people. You really want to take a chance a move a piece but the crowd is doing everything they can to prevent you from playing the game.

At the beginning of Jenga, the tower is perfect, and the more pieces you move around, the greater the chance the tower will fall.

Oh wait… At the beginning of Jenga, the tower is perfect.

We will only ever scratch the surface of such things, but eventually if you open a large enough wound the whole thing will come pouring out.

But I’m not here to really form an opinion, I’m just here to help you with yours.