It took some thinking. Last year I wrote about significant things that happened in the year, but it was much more of a short, goofy list. This year I wanted to do something different and dedicate the significant things to their own separate posts. Doing so gives them room to breathe, and hopefully room for me to write.
—

I may get in trouble for using this image? Though it was released by the DPRK themselves. If not, here’s a delightful image of Militants showing Kim Jong-Il all of their favourite websites.

I would argue that North Korea had the most significant year, in terms of how much time it seemed to have spent in the news. From the strange Vice visit, to threats of missiles and assassinations, one couldn’t help but be strangely fascinated by whatever the hell was going on over there.

Media dubbed it the North Korean Crisis which seems apt. Though with it’s sauve/stubby new leader calling the shots, You Might as well dub it ‘North Korea’s Mid-Life Crisis’.

For Vice’s HBO show titled ‘Vice’ Dennis Rodman and the Globetrotters set foot on the land for what was to be a friendly match of the olde bounce n’ toss. During their time together, Rodman and Kim Jong-Un became the best of friends.

I suppose you could call Basketball a sport that brings everyone together. Un and Rodman side-by-side, having so much fun! It looks rather like Rodman is now ambassador for the DPRK (Democratic Person’s Republic of Korea). He goes back to visit when he can, and is also set to train North Korea’s basketball team.

At least Kim Jong-Un has crossed something off of that bucket list, and officially has a celebrity friend. I’m sure somewhere Sean Penn is a little sad.
—

Putting aside from the comradery through athleticism, the start of the “crisis” was around January 22nd, when North Korea launched a satellite. Launching anything into the air is somewhat of a ban for them, according to the UN. Turns out, they were planning to do a lot of that anyway whether people liked it or not. That meant that they took to testing their Nuclear weapons that they had lying around.

During a routine training exercise between South Korea and the US, the North threatened to withdraw from a non-aggression pact between them and the South. They confirmed so on March 13 and became ready and willing to take military action against their enemies.

Things got tense and eventually declared a ‘State of War’ some weeks later.

The DPRK became hostile to the rest of the world, threatening nuclear catastrophe if they continue to be agitated.

At least, most of this year just seemed like screaming matches. Could this all be because of the new rule of Kim Jong-Un? Or are they just acting out because they continue to miss their previous leader, Kim Jong-Il. I’ve always been under the impression that Il was much more talented and fun.

Even during that time the hacktivist group, anonymous, took to hacking Uriminzokkri’s (a North Korean news agencies) twitter and flickr account. They dubbed it ‘Operation North Korea’.

Hacking them and making demands may have not been the best thing to do, for a country that probably doesn’t feel all too attached to the internet. If they were, I could only imagine that would have made the North Korean government even angrier.
—

The video above is not only for your entertainment, but also to show another strange story to come out of there this year. On August 20th the alleged execution of Kim Jong-Un’s ex-girlfriend Hyon Song-Wol, along with 12 other members of an orchestral band, took place.

As one source put it, “They were executed with machine guns while the key members of the Unhasu Orchestra, Wangjaesan Light Band and Moranbong Band as well as the families of the victims looked on.”

What was the reason? For violating laws against pornography. The video in question is supposedly the ‘pornographic material‘. At least, that’s what everyone was reporting. It was never actually confirmed.

Later on, informants of a Japanese news magazine said an execution involving celebrities did take place but Hyon Song-Wol was not among them. They also claimed that the executions were related to an unflattering documentary of their new ruler, and called it pornographic material as a ruse to hide the fact.

On November 3, a report claimed that 80 people were executed for watching foreign television, and owning bibles. DPRK is never one to shy away from threatening those with a potential interest in outside culture, which is the edge that makes the story believable.

Jang Song-thaek, a former mentor to to Kim Jong-Un now deemed a traitor to the nation, was tried and executed. He was seen as nothing more than a person corrupted by Western culture; Taking drugs and gambling money away at casinos.
—

It was a lot of this and more, which made North Korea so involved in 2013. Through the thick of war, many things became unearthed for them which only put them in a more more scarier light. Especially when it comes from the mouths of those that escaped prison camps, where they spent the majority of their life.

While the Democratic People’s Republic of Korea tries to tightly control so much, many more dark secrets trickle out over the image that they want outsiders to believe. With 2013 coming to an end, I’m sure we’ll be hearing more about them in the future.

Though he’s in his 30s, Kim Jong-Un may still have some growing up to do. Which will be hard for someone that has so much power over a country. One can only hope that Dennis Rodman will take him under his wing and at least share some wisdom of the rest of the word.

Otherwise the former Chicago Bulls star will have to mind his Ps and Qs. 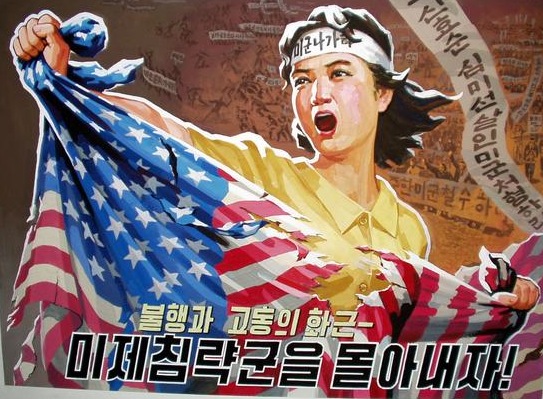 One thought on “Significant things of 2013: Oh Glorious Republic of North Korea”