There seems to be a fundamental belief that the year we live in dictates how the state of the world should be. How we progressed in technology and human rights is because it’s the year 2016. So it’s only fair that our fiction should reflect that as well.

Granted, I think the only reason why people were convinced Link was going to be female in “Breath of the Wild”, is from the very first teaser trailer. A cloaked hero suddenly unravels and jumps off of their horse to reveal an effeminate looking hero of Time.

[He always has had that look, but when you compare him to most male protagonists in video games, he might as well be a woman.]

Look at this girl.

Something just kind of stuck enough, that people would constantly be speculating there was going to be a female Link (I guess). Some new additional promo artwork would convince people they were female. Rumours were circling that a reason why the game was pushed back was so they could add a female. Even a lanyard at this year’s E3 was enough evidence to confirm that female Link was in the game.

But when you convince yourself so much of something that you’ll believe to be true, you’re setting yourself up for a disappointment that no one else had anything to do with.

The games press went to talk to Aonuma to which Aonuma said, “We thought about it and decided that if we’re going to have a female protagonist it’s simpler to have Princess Zelda as the main character.”

But then he continued to say the thing everyone is focusing on: “…if we have princess Zelda as the main character who fights, then what is Link going to do? Taking into account that, and also the idea of the balance of the Triforce, we thought it best to come back to this [original] makeup.”

The crux of the problem, is their 30 year old established franchise where characters are key to being who they are. It’s kind of like the Bioshock Infinite scenario, that there’s always a lighthouse, a man, and a city.

Link, Zelda and Ganondorf are characters locked in an eternal struggle of these roles. It’s formulaic, but it’s worked. I can’t sit here and tell them why Zelda shouldn’t always be a captured princess that needs saving. It’s a tiresome trope, but at the same time we should all be aware of how gifted and capable Zelda is, as a character. But that’s a story for another time.

The question of “Why isn’t there a female Link?” could be easily answered with the question: “Why is it that important, that Link needs to be female?”

Then again the answer to that question is, Link is an empty vessel of a character who is supposed to represent the person playing the game. That’s the original intention of him on the NES and it should still continue to be that way to this day. 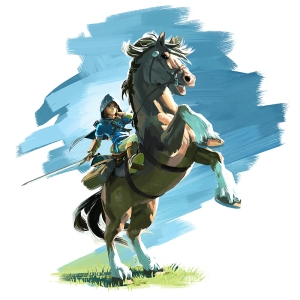 Link is clearly a woman in this picture.

I wouldn’t have a counter to that, because yes. Link should be able to represent anyone who plays him, And he does do this.. he just happens to be male.

Remember Hyrule Warriors? Remember when the developers, said they were working on a female version of Link but it never made it to the final game? So then what? Let’s say Tumblr finds this out, and stinks about it, or Twitter finds out and stinks about it, or whatever social media site it was. Let’s just say that ‘fans’ wanted to see this Female link come to life.

So when they were working on HW: Legends, everyone was happy to see that Linkle made it into the game. For how long? A day or two? Maybe a week at most. The point is, when that game came out, nobody really cared. They heard/saw ‘Female Link’ and demanded it happen. Yet nobody talks about Linkle now, the way that they did when she was just concept art in a book.

Waluigi is a more popular character than she will ever get to be. (he even has an amiibo)

I think the point that I’m trying to make is: Nobody really cares about a Female Link, but they demand that he be changed into one anyway. I bet you could even ask someone who is steaming through the ears at Nintendo right now and they’ll say something like “I don’t even care, but Call of Duty, and NHL let’s you have female characters, so Link should be one too.”

But that’s the problem, they don’t care. They think changing the gender of a 30 year old man is going to make them satisfied. But if that were the case, Hyrule Warriors would be a really good game for a lot of people, and that Linkle is a step in the right direction. Because it’s not about the story, or how the game makes you feel, but how that one character is a gender.

If you cared more about a woman’s role in the Legend of Zelda, you would care more about Zelda herself. The problem is people only see her as a damsel in distress, when a fan could tell you she is so much more than that.

There is too many people getting bent out of shape for a detail that doesn’t matter to them, and they can’t even see a character for what they’re worth. (We don’t even know what Zelda’s role is in ‘Breath of the Wild’ yet.)

Link being male shouldn’t deter inspiration and wonder from anyone else that isn’t. He represents something that isn’t beholden by his gender. Adventure is for everyone. Exploration is for everyone. You are Link no matter who you are, and he doesn’t have to change who he is to do that.